Having successfully demonstrated capture and characterization of unstable intermediates in the stereoselective bromination of a biaryl substrate with a biomimetic synthetic peptide (reported in Science, Feb. 2012), we will now turn our attention to the Mn and Ir based organometallic compounds under study by the Yale Solar Group for water oxidation. We intend to prepare the key oxidation states required to promote O-O bond formation in the late stages of the reaction, where the hydrogen atoms on the water molecules have been sequentially removed through proton-coupled electron transfer events. 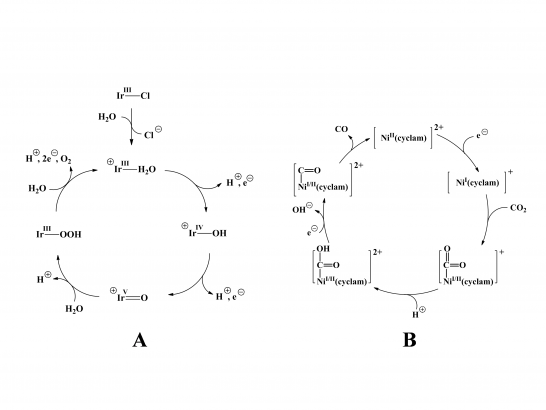 Because the critical species are highly unstable, we outline a two-step approach where we first refine our spectroscopic methods to expose the structure of the M-O2 motif in relatively stable control species, while at the same time test a variety of schemes to oxidize the compounds of most interest in water oxidation. For the case of reductive CO2 activation, we are developing a new instrument based on a very high-resolution Fourier transform ion-cyclotron resonance spectrometer (7 Tesla), which will be fitted with two stages of cryogenic ion processing so that highly unstable species can be generated using the unique reactions available in cluster-mediated ion chemistry. The initial target systems for CO2 activation are Ni compounds developed by the AFOSR MURI group (Kubiak), and will evolve to include other homogeneous catalysts including Rh- and Re-based platforms. In both cases, our goal is to provide a qualitatively new window that displays directly how the most important chemical transformations respond to modification of the ligands, spin states, and degree of solvation of the catalytic intermediates.