Our DOE-supported program extends our experimental and theoretical methods exploiting the unique properties of isolated cluster ions in order to quantify the molecular-level interactions that underlie complex, often cooperative, behavior of solvent networks such as that found in liquid water. This endeavor has traditionally been concerned with structural identification of reaction intermediates found in radiation chemistry, including the hydrated electron as well as the free radicals that arise from it in radiation-damaged systems.

The temperature control aspect of the program will be focused on understanding the microscopic mechanics behind the broad vibrational spectrum of liquid water.  Specifically, we propose using a trace isotope-based approach to extract the local fluctuations of individual water molecules that contribute to the spectral diffusion at the heart of the spectroscopic behavior. This information will provide direct observables with which to determine the accuracy of models that are presently used by aqueous chemists to predict chemical behavior in extreme environments such as those found in remediation of contaminated sites. 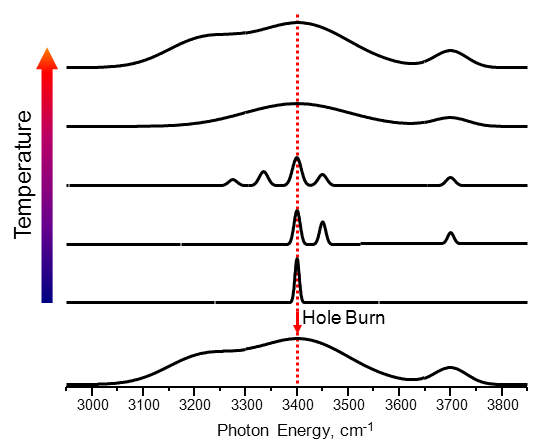 The introduction of new ion sources will allow us to move beyond water chemistry to include species involved in the reductive activation of CO2 for the goal of developing transportable solar fuels.  Once again, we focus on preparation and theoretical analysis of the key reactive species invoked in kinetic modeling of catalytic activity, this time often occurring in ionic liquids.  Particular emphasis will be placed on understanding the origin of specific interactions of CO2 with the anionic components of the ionic liquids that lower the overpotential in electrochemical processing of CO2.