To study systems with large mass-to-charge ratios or systems that have very complicated isotope patterns we need a spectrometer with the ability to accurately determine masses so we can be sure we are studying the right ion. 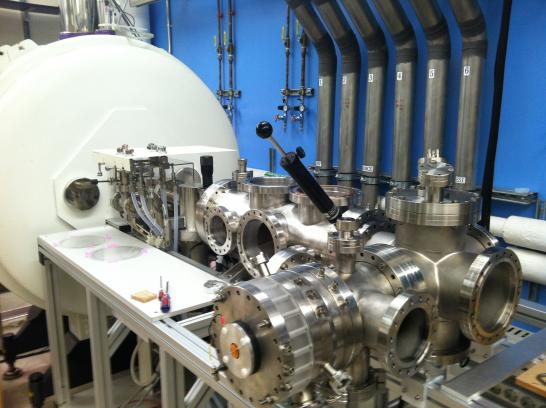 For this we use a Fourier transform ion cyclotron resonance mass spectrometer (FT-ICR MS).  In this technique, the mass-to-charge ratio (m/z) of an ion can be experimentally determined by measuring the frequency at which the ion processes in a magnetic field.  These frequencies, which are typically in the 100 KHz to MHz regime, can be very accurately measured with modern electronics making it possible to determine the mass of an ion to within ±0.000005 amu or 5 ppm.  This instrument also has much higher resolving power than our time-of-flight instruments, enabling us to study systems of up to several hundred kilodaltons.  Additionally, the detection scheme in ICR MS does not require destruction of the ions and allows us to do MSn, ion-molecule reactions, and isotope exchange reactions. An infrared laser beam can also be introduced in the ICR cell and intersected with the ion packet to record infrared spectra through photofragmentation. 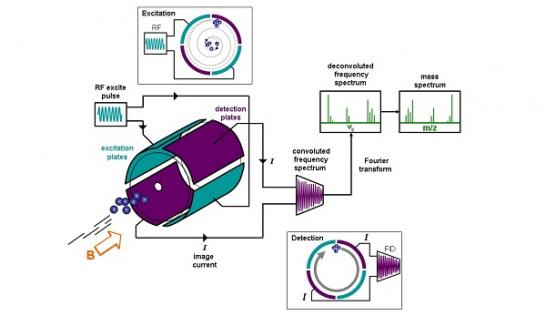 In our experiment, ions are first generated in a custom, home-build electrospray ion source that is also equipped with a cryogenically cooled ion trap which allows us to create vibrationally cold ions with a H2 tag, just as we do in our time-of-flight instruments.  The cold ions are then passed into the ICR cell which sits in the middle of a 7 Tesla superconducting magnet.  Ions traveling in magnetic fields are confined to circular orbits by the Lorentz Force and process in these orbits at a frequency called the ion cyclotron frequency, nc, which is given by nc = zB0/2pm, where B0 is the strength of the magnetic field, z is the charge and m is the mass of the ion.  To increase detection efficiency and resolution the ions are “excited” by an RF pulse to a larger ICR radius, and the cyclotron frequency is then measured by detecting an “image current” that is induced as the ions pass by the detection plates.  Fourier transform of the free induction decay converts the signal to the time domain which is then converted to a mass spectrum.