We are part of a multi-university, NSF-funded NSF Center for Aerosol Impacts on Climate and the Environment (CAICE), allowing us to combine our experience in small water and salt clusters with a multidisciplinary team of oceanographers, atmospheric chemists, and computational chemists. We provide the first experimental spectra of species invoked to play a role at the microscopic, molecular level in the chemistry of sea spray aerosols.  This information is crucial for the calibration of theoretical models used to simulate the behavior of much more complex systems.  A particularly important aspect of our role is that we first establish the spectral signatures of the various species frozen into their zero-point vibrational energy levels, where commonly used ab initio methods are routinely employed, but are seldom actually tested. We then merge our measurements with those obtained in top-down sampling experiments carried out by CAICE collaborators by systematically increasing the temperature and composition of the assemblies to follow how well-defined features in the spectrum evolve as the aggregate undergoes large amplitude motions in ambient conditions. 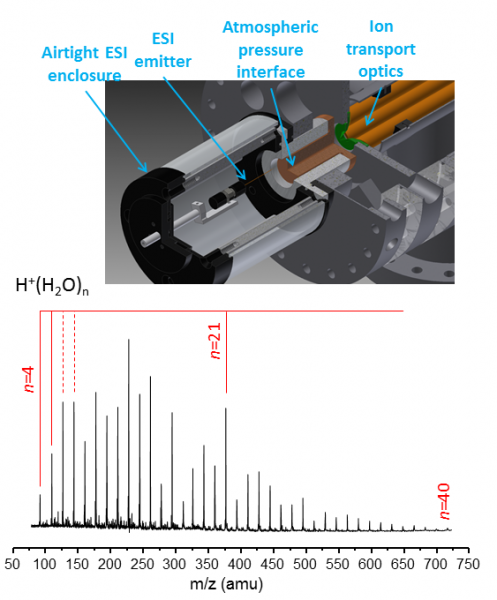 The simulation of aqueous processes occurring at the air-water interface, ranging from new particle formation at the smallest aerosol sizes to the uptake of small molecules like N2O5 at aerosol surfaces, requires accurate theoretical treatment of how water molecules interact with highly charged solutes (e.g., SO42-, Mg2+, etc.) in the primary hydration shell. From the experimental perspective, vibrational spectroscopy provides one of the key observables for the identification of chemical processes occurring both at the interface and in the bulk.  Our role in this endeavor is to establish the spectral signatures of these motifs and those that arise in other CAICE contexts by forming the arrangements in clusters with exact composition and hydration network morphologies.  Our approach involves comparison with vibrational spectra of the species frozen near 0 K using very recently available cryogenic ion spectroscopic techniques. Our group at Yale has played a leading role in developing this capability, and its application to systems of importance to the CAICE mission is in its infancy. One aspect that is clear from the outset is that the typical treatments invoked to simulate water in bulk environments are qualitatively inadequate for predicting the behavior of water near ions.  This regime requires a complete description of the distortions suffered by a water molecule in a particular solvation site.  Given that the behavior is complicated at absolute zero, it is clear that finite temperature simulations with molecular level accuracy represent a grand challenge for contemporary physical chemistry from both the experimental and theoretical perspectives. In particular, probing not only the minimum energy region but also the shape of the multidimensional potential energy surface, the measured vibrational spectra provide stringent tests for molecular models of ion-water interactions that can be used in computer simulations of (complex) aqueous systems.

Work on this project has taken two tracks: first, in recognition of the fact that most species of importance to CAICE are hydrates of complex ionic assembles, we have constructed a new ion source that can control the relative humidity of the sampled gas and thus enable control of the degree of hydration of the ions passed to the mass selective vibrational photofragmentation mass spectrometer. A sketch of the source and the application to generated intermediate size protonated water clusters are included in Fig. 1. Second: we extended our ion trapping capabilities to allow the recording of vibrational spectra of molecular assemblies thermally equilibrated to a controlled temperature.

Significant results: As a first demonstration of the combined power of the new methodologies, we monitored the changes in the OH stretching region of the vibrational spectrum of I–(H2O)2 at temperatures between 4 K and 300 K, with the data reproduced in the false color contour diagram in Fig. 2.  This is the first such observation in the molecular physics of finite systems, and clearly indicates a rudimentary “phase transition” type behavior at around 125 K where the water dimer breaks apart into two water monomers that independently orbit the ion. These results are now being analyzed by the Paesani group, who are using this data to calibrate the efficacy of the potential models used in the simulation of the air-water interface in the presence of dissolved ions.  A paper describing both the experimental advance and the theoretical implications for the water modeling is presently in preparation. 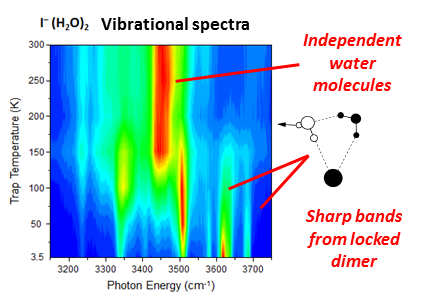 Figure 2: Temperature dependence of the vibrational bands associated with the water dimer attached to the Iodide ion.  Note prompt dissociation occurs at 125 K.

Over the past year, we have also engaged a late-breaking and important observation by the DeMott group regarding the small molecules responsible for ice nucleation in top-down sampling.  Raman microscopy Laskina in the Grassian group were consistent with the presence of palmitic acid, raising the issue of how the spectrum of that molecule depends on charge state and degree of hydration.  We were able to quickly begin a study of these issues from a bottom-up approach where we start with cold complexes of the acid and its pH dependent charge state.  The first results from this study are presented in Fig. 3 on the deprotonated form of the closely related C-12 (vs C-16) long-chain (dodecanoic) acid.  The likely structures at play in the field measurements are, of course, likely to be much more complex and involve counterions.  In light of the fact that the alkaline earth cations are thought to play a particularly important role in the chemistry of the interface, we have begun a more aggressive aspect of this part of our study and already demonstrated the preparation of mixed Na+, Mg2+ and Ca2+-based assemblies with first results included in the mass spectra on the right of Fig. 3.  This data was taken on a high-performance mass spectrometer (7T FTICR) that is part of suite of instruments available for this work in the Johnson lab.  We include a preliminary structure (at the AM1 level) to gauge what type of ion pairing is in play at the core of the cluster.  A major focus for the next serious of experiments on these species will be to obtain their temperature-dependent vibrational spectra and introduce water molecules to understand how water behaves in the extreme environment at the core of a micelle.