A significant component of our research program consists of developing new instrumentation to provide methods for the structural characterization of chemical species invoked to explain solution‑phase reactivity. An approach developed in the Johnson Lab (patent pending) involves extracting the chemical species directly from their native solution environment, isolating them in the gas-phase, and rapidly freezing the isolated compounds to minimize further chemical reaction.  Infrared spectroscopy is then performed on the cold complexes to yield vibrational information on the system. This allows us to study non-volatile molecules but also obtain a molecular‑level “snapshot” of the various intermediate species formed during a chemical reaction which can be used to determine probable mechanistic pathways.

Although the chemical systems of interest to our lab vary widely from organo- and organometallic catalysis to folding of synthetic peptides the basic experimental requirements are similar. In each case, the chemical species of interest must be carefully extracted from solution using electrospray ionization (ESI)—a versatile ionization technique developed by John Fenn at Yale.  In this process, a potential gradient is created between a syringe needle containing a reaction mixture and the inlet to a mass spectrometer. This induces charge accumulation in the droplet generated by the ESI needle which eventually bursts away from the needle due to coulombic repulsion, thus forming many micro droplets that may contain the chemical species of interest (see Fig. 1). Solvent evaporation among other processes can be manipulated to control the size of the final droplet so that vibrational analysis may be performed both in the presence and absence of solvent. 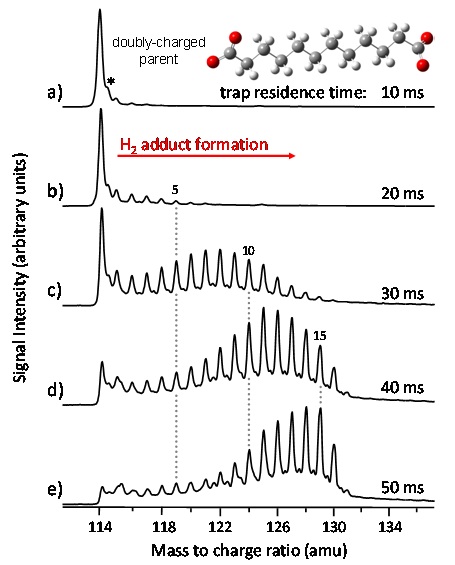 Once in the gas‑phase, ions are directed toward and accumulated in a radio‑frequency ion trap maintained at 10K by a closed cycle helium cryocooler. The contents of the trap are quickly equilibrated at 10K through the use of a pulsed He/H2 buffer gas mixture which effectively quenches all molecular degrees of freedom and traps the ions in local energy minima of well‑defined molecular structures. Most importantly, the low temperature environment provides ideal conditions for the condensation of weakly bound tags rare gases, small diatomics, etc.) onto the trapped ions which is critical for our vibrational predissociation approach. Figure 2 illustrates the effect of trap residence time on H2 adduct formation for a small dicarboxylic acid generated with ESI and subsequently cooled in the ion trap. Although this approach is still in its infancy, it appears to be a general and powerful tool in the analysis of chemical species relevant to solution chemistry.