The infrared photofragmentation experiments performed in the Johnson Lab rely on mass spectrometric methods for both the selective interrogation of molecular ions and the acquisition of their infrared spectra. Time-of-flight mass spectrometry (TOF-MS) is used in tandem with both our supersonic jet and electrospray ion sources.  We use a Wiley-McLaren linear-type TOF mass spectrometer which consists of a series of parallel plates, onto which voltages are “pulsed” at the repetition rate of the experiment (10 Hz). These electrodes are used to create two ion acceleration regions (I and II) with a variable delay time between them which helps to correct for the initial temporal (Δt), spatial (Δx), and kinetic energy (ΔKE) spreads of generated ions with the same mass-to-charge ratio.  Depending on the polarity of the voltage applied to the electrodes, anions or cations are then accelerated again by the electric field created in Region II of Figure 1 into a field-free flight tube and towards a multichannel plate (MCP) detector several meters downrange of the ion source. 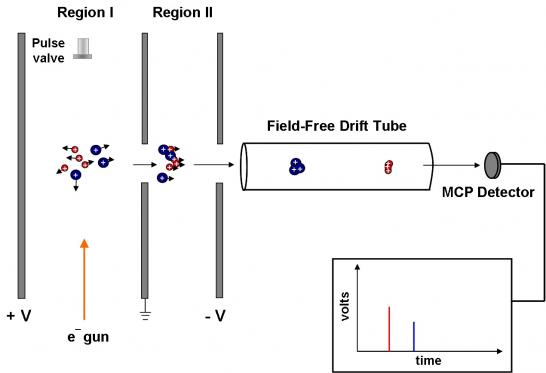 The potential energy of an ion in an electric field depends on the charge of the ion and the strength of the electric field, PE = qV, where “q” is the charge and “V” is the electric potential difference, or voltage. This potential energy is converted almost entirely to kinetic energy after the ion leaves the electric field region (enters the flight tube) so that qV = ½mv2, where “m” is the mass of the ion and “v” is its velocity. Consequently, the time it takes for the ion to reach the detector at a fixed distance, depends on the square root of the ion’s mass-to-charge ratio„ where “v” has been replaced by distance (x) divided by time (t). As a result, ions with larger mass-to-charge ratios will take a longer time to reach the detector than ions with smaller mass-to-charge ratios and a mass spectrum is obtained by monitoring ion intensity as a function of ion flight time from the source to the detector. 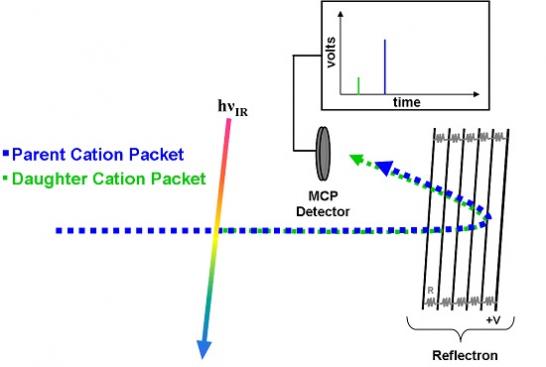 The mass resolution provided by the Wiley-McLaren TOF-MS allows us to intersect our tunable pulsed laser with a single packet of ions of a selected m/q. Laser interaction at specific photon energies will result in the evaporation of the weakly bound tags from the parent ion.  In our experiment, an infrared spectrum is collected by monitoring the production of a specific daughter ion as a function of the laser photon energy. However, another stage of mass-selection is necessary after laser interaction to separate the parent and daughter ions.  A reflectron, which consist of a series of parallel plate electrodes, is implemented in our tandem TOF experiment for this purpose. It is often referred to as an “ion mirror” as ions are reflected by a repulsive linear electric potential. As shown in Figure 2, the parent and daughter cations will come to a stop when their kinetic energy (from the field-free region) is equal (but opposite in direction) to their ion potential energy inside the reflectron. The cations will then accelerate backwards towards an MCP detector and separate in space relative to their mass-to-charge ratios. Therefore, the daughter fragment ions will reach the detector before the parent ions.