The strong spectral response of hydrogen bonds (H-bonds) makes vibrational spectroscopy a powerful structural probe for molecular assemblies tethered by multidentate linkages involving electrically charged and neutral contacts. We exploit very recent technological advances that allow increasingly complex species to be extracted from solution, frozen into well-defined structures near 10 K, mass-selected, and then characterized with vibrational, electronic and (in the case of anions) photoelectron spectroscopies. The most important aspect of these gas-phase studies is that, because species are quenched into configurations with minimal thermal fluctuations, much sharper band patterns are recovered than are observed in condensed media. This is especially true for the electrically charged H-bond or intermolecular proton bond, where the cold ions reveal the mechanical and electrical anharmonicities underlying the very diffuse bands observed in solution. 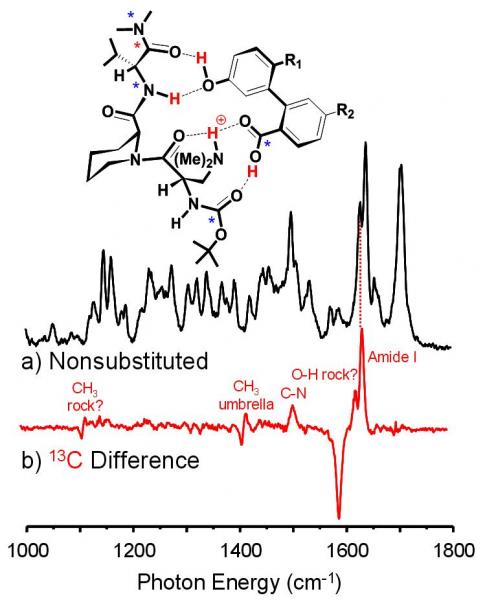 This approach also reveals the delicate interdependence of solute ion structure and the shape of the surrounding solvent network. We now see an opportunity to extend and expand the utility of vibrational spectroscopy to elucidate the particular H-bond donor-acceptor pairs of folded structures of biopolymers as well as non-covalently bonded host-guest complexes. We will then explore the relationship between the conformations obtained in the gas phase and those found in solution by following the dependence of ion structure on the number of solvent molecules retained in the gas-phase cluster.